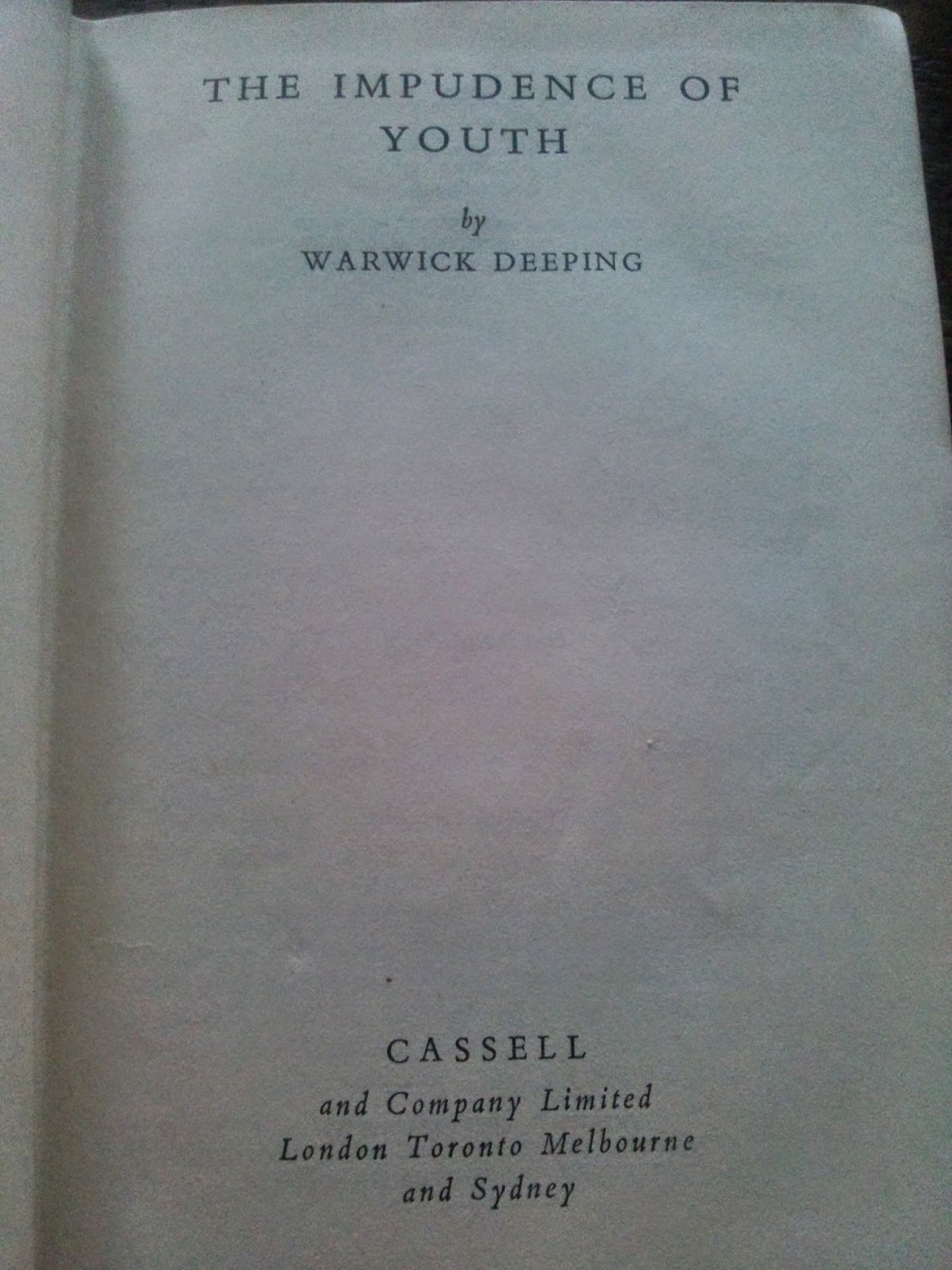 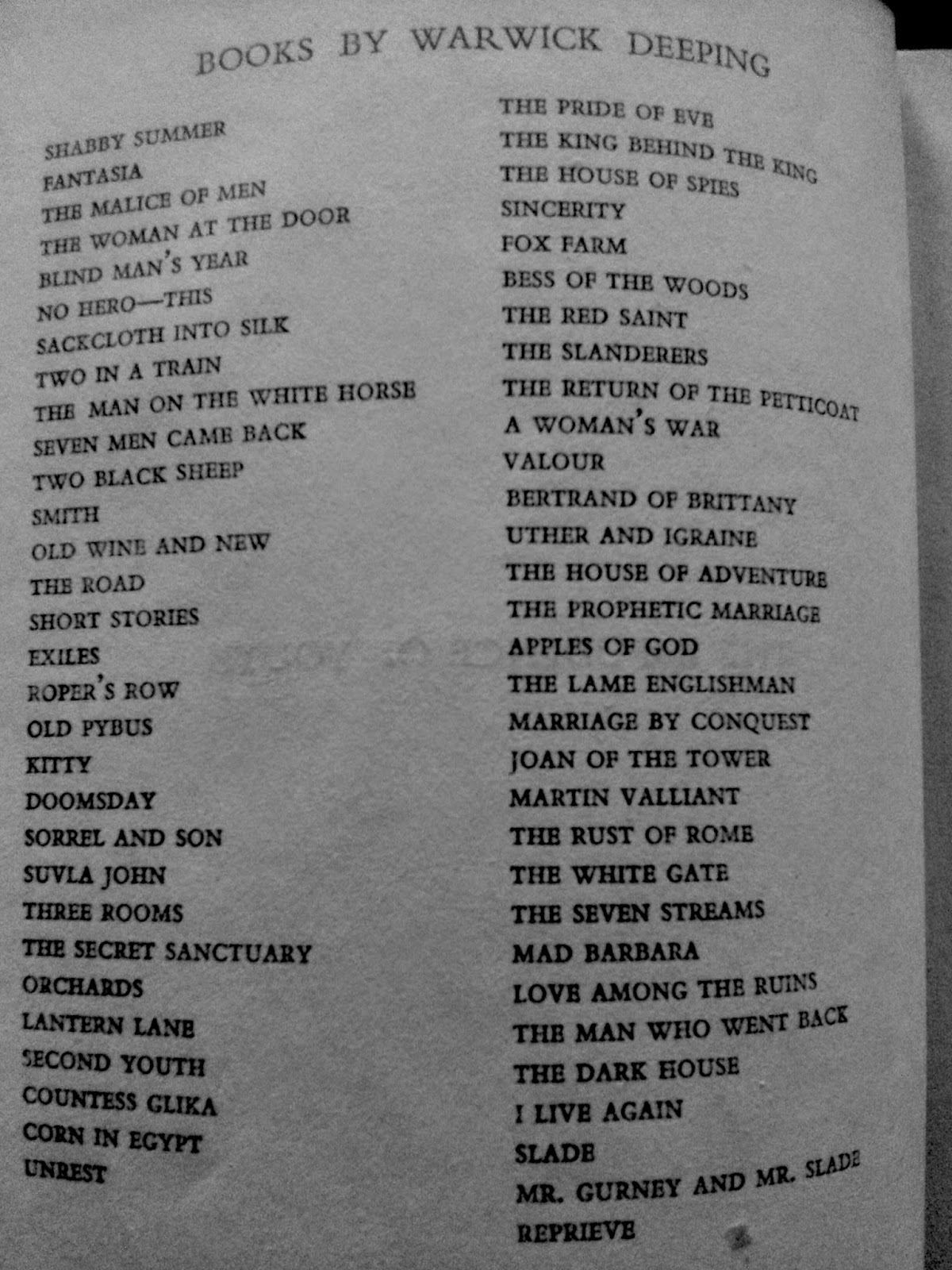 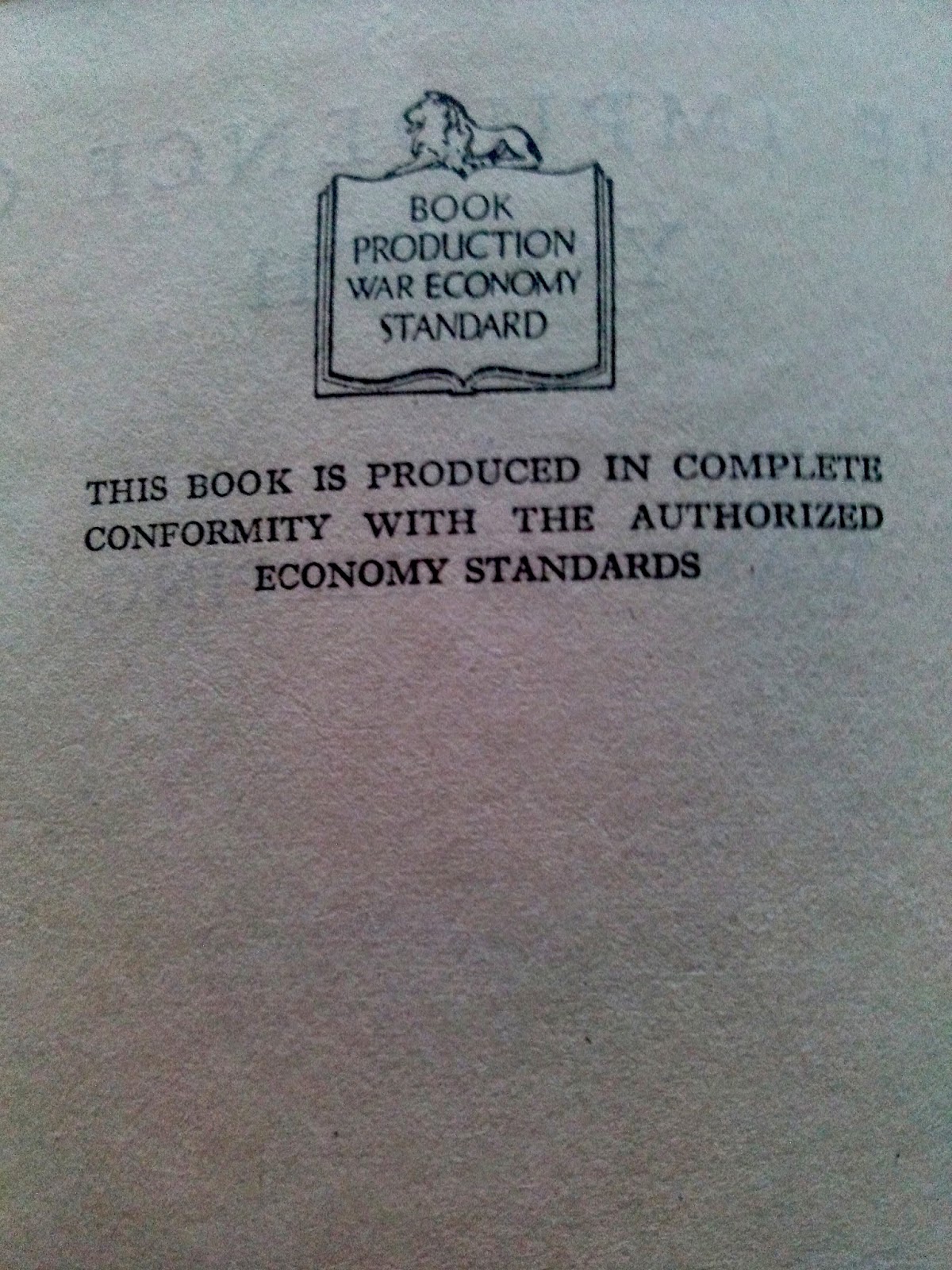 It had been one of those days where the rain had given up and allowed the sun to prevail. There was a jangle of change in my pocket and some of the coins where even the shiny important sort: I was thinking perhaps I would treat myself to a beetroot or a bulb of smoked garlic, from the greengrocer in the White Hart Market. Across the tiny market lane the secondhand bookstore had a box of tired old books, three for a pound. Three books for a pound, irresistible: that's a fact. I found a David Lodge, a Bernard Cornwell, and a 1946 cotton covered hardback titled The Impudence of Youth. The author, the eponymous Warwick, had written quite a list, I saw, and something about the whole package had a pleasant feel to it. And I had enough pennies left over to purchase a bunch of celery.
Settling outside for a read, the words were dated, and that was most of the charm of the piece. It had a mix of 'come on, there's a plot that needs to proceed' briskness and distracting details that were possibly designed to build a scene but I found quite comic. For example:
'What do they call this place?'
'Monk's Wood.'
'How utterly right. Where do we come to? Nowhere, and everywhere?'
'Yatley Heath. But it isn't quite a heath.'
Why wasn't it a proper heath? Why did the reader need to be aware of this? In the rest of the book it receives all the honours due to a heath. There were also little gems of character description; 'her garden was like her self, of a large simplicity.' And then a suicide was the grand finale! The last line: 'He had gassed himself. THE END' Distinctly odd, and that's what I liked about it most.


The plot: JJ Pope is a child genius with a small body and a big head. He is raised by his Aunt Jane. He gets a scholarship to Cambridge, is bullied but stalwart, makes a good friend, Peter, who is the heir of Pratten's Pills. He becomes a doctor although being a know-it-all and marrying Kitty the pretty milliner make it very difficult to advance his career. He is working on cures for dyspepsia and period pains. Money runs out, Aunt Jane dies, Kitty loses the baby, gets tuberculosis, it is all horrible. Cue Mr Pratten Snr offering a job making pills for these very interesting cures JJ has been slaving over. Kitty is sent to a lovely sanatorium, she recovers. Peter is killed in a car crash, JJ becomes heir to Pratten's Pills. Mr Pratten Snr also dies. JJ is now rich. He builds a house and a sanatorium in the vicinity of Yatley Heath but is unable to save the chap who used to bully him. The End!
If you want to pretend it's 1946, I recommend reading this book in a tea shop. Also, wear a hat.

"...One set out to see life and its realities, its pathos and heroism, and I have managed to find it more splendid than sordid. A negative cynicism seems to me to be a form of cowardice."

"…to get the best out of life one must begin with some sort of purpose. We must begin by wanting something that is worthwhile, and by setting ourselves passionately and stoutly to possess it." 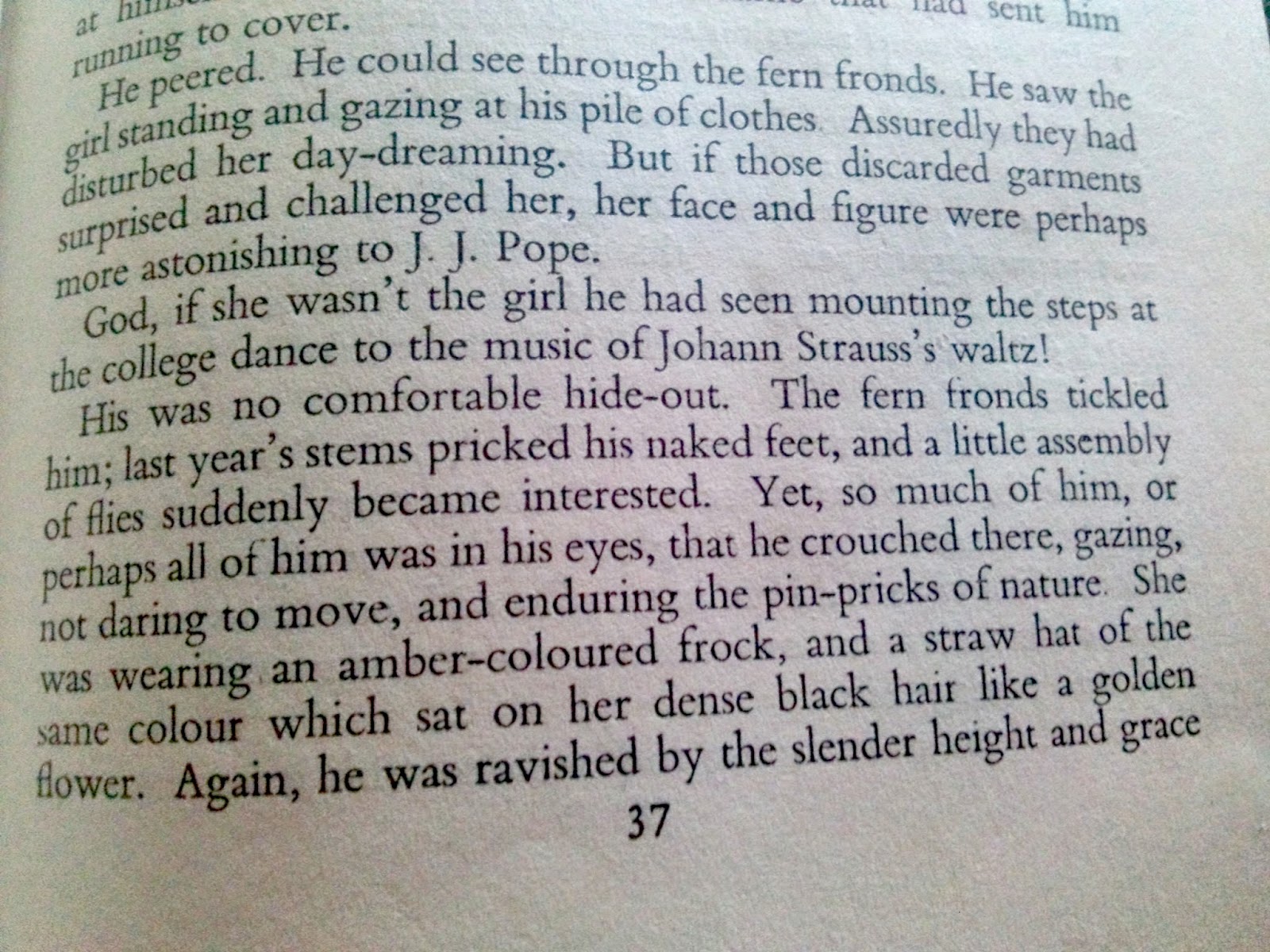 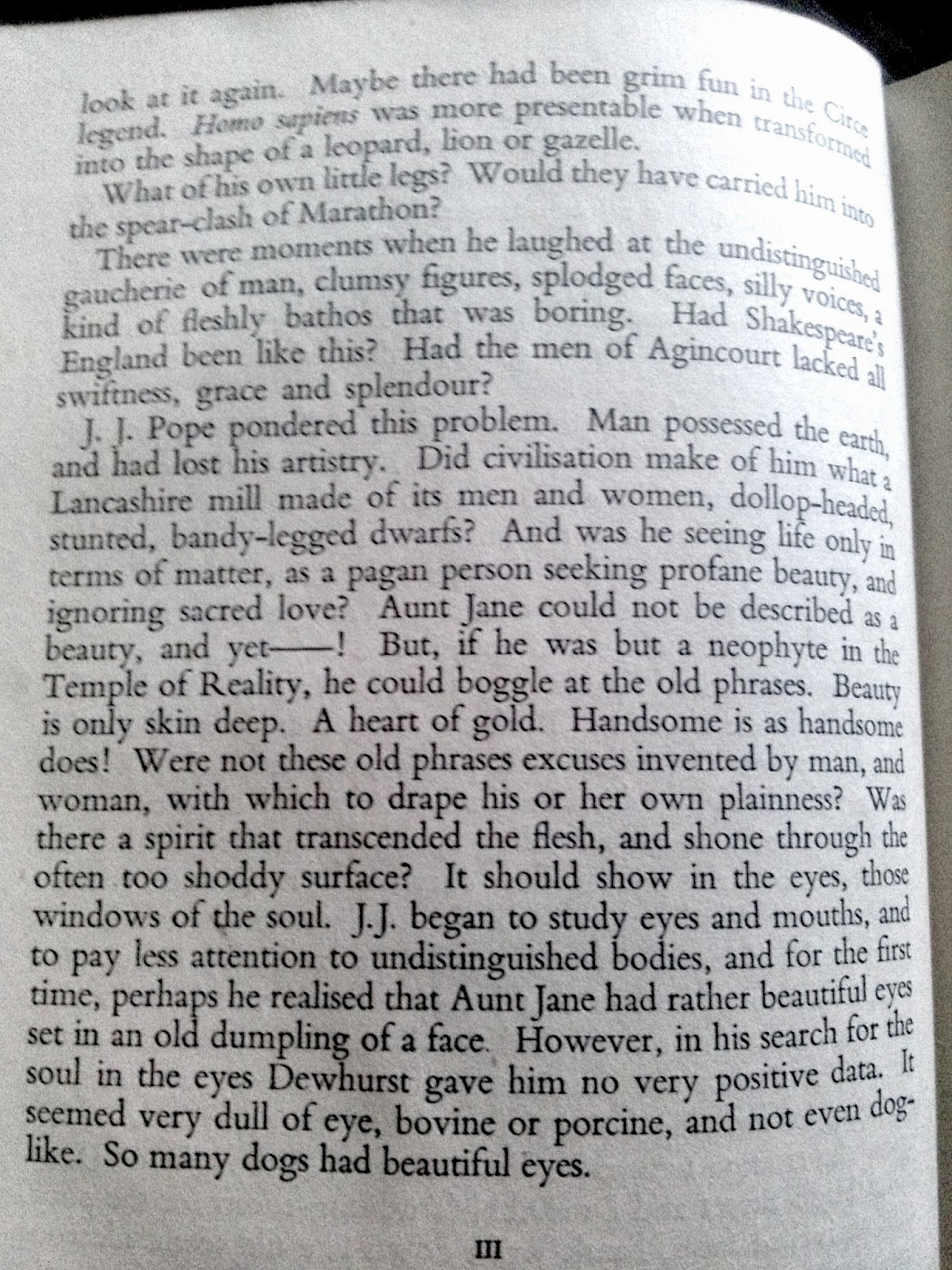 My W word for today's A-Z challenge, by random dictionary selection is: wet. It is raining heavily over the fields today, a good thing for the crops, but I have washing to dry. It reminds of JD Salinger: and this always makes me smile:


'Poets are always taking the weather so personally.'

(Very busy, this weekend, lots of our superb Tae Kwon-Do students are bracing themselves for The Black Belt Grading and we are visiting my brother and sister-in-law, who are moving back to Taiwan next month: if you visit my blog and leave a comment and a link to your blog, I will get back to you... dreckly.)