Polonaise, the dictionary selector dumps on me this morning. A what? I can read the definition but what to make of it in terms of producing a post that contains any kind of illumination?
Some further research is pursued.
Strong coffee is brewed.
Notes, gleaned from the Encyclopedia Brittanica:

I am then distracted (or am I being inspired? That's a perpetual conundrum of any writer) by something not revealed in the dictionary definition:

'robe à la polonaise, woman's garment of the later 1770s and 1780s similar revival style 1870s inspired by Polish national costume. Gown with a cutaway, draped and swagged overskirt, worn over a petticoat. Late nineteenth century, polonaise also described a fitted overdress which extended into long panels over the underskirt, but was not necessarily draped or swagged.[ Wikipedia]'

The term was revived for styles in the 19th and 20th centuries, is little used in the 21st. There is some catty fashion debate of use here that holds the potential for amusement at the expense of human habits…
Now there is so much to write of!
(The writer here exudes a confused sigh.)
All of this, perhaps, detracts from the source: Polska- known to us as Poland: most populous post-communist member of the European Union. A population which has been subject to hundreds of years of rollercoaster history: which only regained such populousity in the 1970s: after the shocking statistics of the Second World War, after Treblinka, after Aushwitz.

'90% of casualties were non-military'

(Here the writer feels that foul cold touch: the deep horror: the dread and wrench of so much loss. All we have to do is be nice to each other: why not do that? One job, humanity, you had one simple job!)
Strong coffee pours into a simple mug. The sun is shining.
There was the Golden Age, there was Casimir the Third, full of warm acceptance and bright learning… and a penchant for bigamy.
There is over a thousand years of history, here.
One blog post cannot match that.
So, where is this journey of discovery going to rest? And what treasures will be brought back?
Music, that's how it started: return to the beginning and try not to get lost. Polish music, in particular: ah yes, most people have heard of Chopin: oh, and what's here? Disco Polo? A derivative of disco and folk music, popular in the 1990s? This can only be fun, life affirming, bursting with good-natured comedic simplicity.

'Disco polo could be heard mostly at country picnics, country depots, weddings or during political campaigns in Polish parliament and presidential elections. Disco polo is generally perceived as kitschy in its artistic value. It is often looked down upon as a provincial genre of music.'

A quick forage to youtube then, with visions of disco balls spinning from mossy boughs in ancient forests; full skirts in folk art colours, meat pies on a trestle table, wild boar snuffling in the undergrowth, promises for future prosperity, bunting and vodka…
Presenting Shazza, Queen of Disco Polo: her real name is Magdalena.  The video contains a variety of historic and cultural costume that, in some gorgeous kitschy way, stitches together a feeling of the redemptive power of eccentric jollity.
'Bajao Bongo' 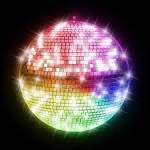