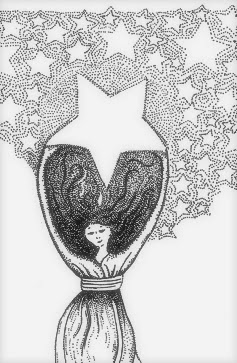 Above the lights of city roads, the moon is close to full. Artifice draws the eye first: the impersonal, the alienation; city clichés: things expected. A view from a car, too, a further segregation. Other traffic is little more than white noise, a concentrated, constant background. Tableaux of reality flit by: outside a bar a man gestures come in, another man raises his hand, nods his head. They wear similar coats. In the chip shop a girl leans over the counter to hand a child some greasy food. Little hands reach up, fingers splayed wide.
Cashiers in the supermarket uncover a misdemeanour. It makes one of them cross, and one of them shrugs off the care, and the others say it is wrong but they can see how it happened. The song of their voices is recognisably human over the drone of air conditioning.
Strips of light overhead, like a surgical theatre, like a laboratory. The numb dread that no one observing will care for a stray from elsewhere. Though what will happen?
Look at the mass of stuff, the patterns, the colours, the possibilities. Coconut water in a can. Want a sack of Madras powder? The regular lines of shelves. The dirt people tread in, that someone is always tasked to sweep up. Over the roof, the moon still shows. People smile, even at strangers. The lit up sign has one uncooperative letter, gapes reminiscent of a missing tooth.
Look how tall the building is, under the moon that reflects in car park puddles, that makes pale islands in a dark tarmac sea.
Create your own reality, live as though it's true? 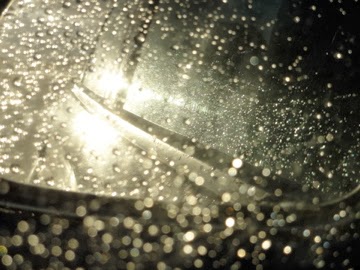