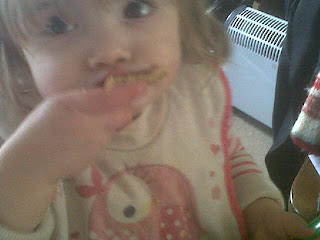 As I type, a queen wasp is circling inside the light shade. White washing dangles damp from the clotheshorses: it has been fetched in from flails of chill wind and waning flares of sun. Indoors, it has been warm enough to wake a high-ranking wasp.
The fire is not even lit, because the flue is choked with wood ash.
We resorted to electric heat to keep Little Granddaughter cozied up this morning.


I hand her toast in a plastic bowl. She looks at me, says phonetically:
'Szis breakfast?'
'Yes.'
A satisfied nod: the expected answer.

There was no dialogue to be had with the wasp.