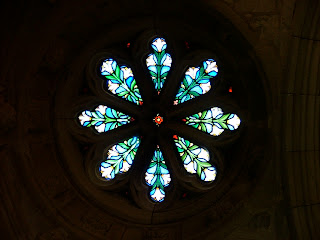 This morning the clouds had dropped and hidden every horizon around here. Walked with Dog till we found a chink of sky and marvelled because it was made of blue.
Took a muddy car for a haircut, which sounds funny because cars don't have hair, only the joke is, mine does, only it's dog hair. In fact, the cut was for my unkempt locks, that stuff that gets tied back out of the way and rarely has any fun. The car stayed parked outside.
Attention is lavished over follicles while I look backwards through mirrors; confusing mirrors with no smudgeprints to differentiate what is real and what is reflected. Light bounces all over the room, gets tangled in neatened tresses. Outside, light bounce is subdued under rain.
Later this day I am driving in the dark, singing. Stars are burst all over the sky: the marvellous abyss.