Editing today: working on the mysterious novel and the final layout of my (first) book of Tae Kwon-Do tales. An extract here, from the story of Jung Gun and a glimpse of illustration as drawn by me and coloured by my brilliant designer. 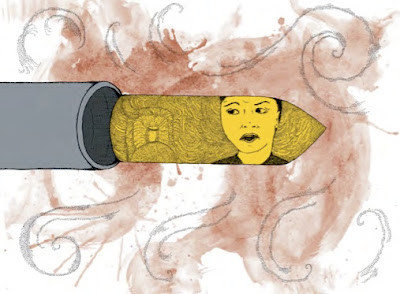 'A north-westerly wind, on its journey across Siberia, blows sharp dry frost into the air. Plumes of steam rise in the same freezing air stream, feathering out like the headdresses on funeral horses. The station shrieks with whistles, resounds with the clanking of metal, the slowing rhythms of wheel rims on the track, the hisses of steam as the train arrives, on time, at 9am. His hand slides into his plain, dark shaded bag, and prises open the tin box. The thin metal is cold. He fumbles the pistol grip, pretends he is looking for his ticket. As he searches, he hears the train doors clatter open. He can smell the smoke from the steam engine, feel the heat of it in the cold air. People stride past, purposefully. He has the pistol in his hand, hidden inside his bag. He looks up, recognises the grey hair, the neatly trimmed beard, the smart suit and starched shirt collar. It is a sub-zero clear morning. The sky is iced pale blue. He loops the trigger with the first finger of his right hand, draws the weapon into the open. He does not hesitate. Six shots leave the gun barrel…
As he stands, gun in hand, at Harbin Railway Station, his breath is visible, a mass of tiny particles, steaming in the frozen air. Every out-breath makes a thin trail of cloud, which exists for a couple of seconds before disappearing. This is the last day he will ever walk down a street.
He will have time later to think of the weather.'