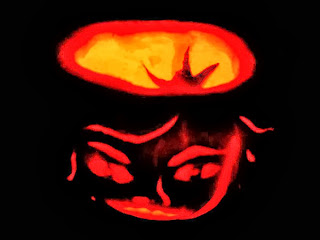 Zombies are giving me food for thought.
They seem to be rather prevalent (although not being a great consumer of modern entertainments this seeming could be misconstrued.) Regardless of statistics, I observe a moment of soulless chomping and wonder what the creature gains from its diet?
A vampire thrives on blood, a werewolf gets to be part of crazy nature, a ghost has the mixed gift of haunting.
Zombies are naught but insatiable consumers.
They are dispossessed of everything but that hideous, pointless appetite.
I think now not of Halloween, as you might suspect, but all the commercial machinations of festival and life that do nothing to promote the real engagements, the real privileges of living.
I think of being part of a different sort of devouring mass, shuffling over superficial traces, treading down careless infrastructures, recycling the senseless, putting the sharp of my tooth against flabby moral authority.
If zombies were like that, they would serve a function much as maggots do, munching out the bad meat and leaving the healthful to throw a party. 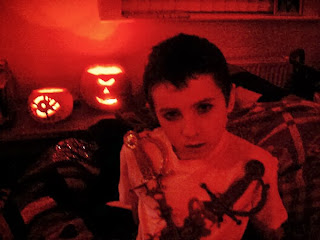