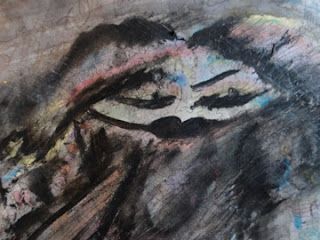 In residence on the couch, me and my phlegmatic cough observe the world through a square of glass. Fronds of rose and berberis gesticulate clues to the fluctuating wind speed. This is the only land in sight, the rest is sky; sky with a thick silver skin.
Last night the fire was lit, the storm squall yowled, turbulence turned as flame, as lashed rain, as though we were swallowed, washed into the belly of some rumbling febrile beast. By lamp light, take up a pen, commit to feverish scrawling: the most interesting of which, in the silvery sheen of the morning, reads ‘Ego is a cute knickknack, a gift, a unique view to form part of a whole.’
Thinking of knickknacks and notebooks, look to the over stacked bookshelves. Here are references no longer referred to; and there are my pink secateurs, which should be with the gardening tools, surely? Still, lends itself to a pruning metaphor.
Now the metaphors are getting over stacked. I need cough medicine and an editor.
While I roll my eyes at books, trinkets, misplaced items and over dressed prose, fizzy little brain scuttles off in another direction:
Seven billion people on the earth, it thinks; it thinks like a hiccup; and only seven basic stories:
One that ends badly: the tragedy
One that ends happily: the comedy
One that defeats a monster: internal/external conflict resolution
One that leaves home and returns wiser: the return voyage
One that quests: internal/external search
One that moves from rags to riches: internal/external/both kinds of wealth
One that represents a new reason for life: the rebirth
It is a neatly blurted thought, in the sense that the numbers tie up, but if each story governs one billion lives: bad luck, tragic billion. I am possessed of no particular desire to count or assign the earth’s population to any of the given plots; I have got a house move to organise, illustrations to finish, words to write, a cough to cure, can’t you see I’m busy, crazy brain-child?
I’m not a monster, it says.
Close eyes, give in, let it play.
Learn this:
What end comes, I do not know, so tragedy and comedy don’t count here; of the five remaining (and some say, there are only five anyway) I can write my life to any of these briefs.
Story, I surmise, is not based on life but on interpretation of life.
Did I not know that?
Yes, arch little brain huffs, but what’s the point of knowledge you don’t use?
A snort of wind makes the stovepipe snicker. 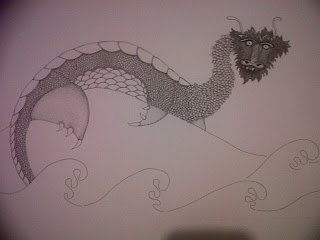