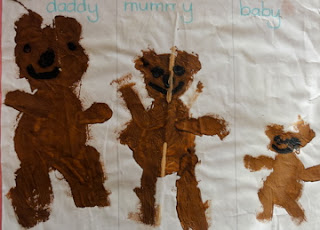 Little Grandson requests some Hide and Seek. For his entertainment Granma picks a flagrant Hide, simply picking up a duvet that is lying on the sofa bed in the multipurposed play and guest room and draping it over her head. Boots, bright red boots, are sticking out underneath.


Footsteps she hears: the closet door squeak, the spoken 'No, not under the bed. She's not in here, Grandad.'
I am in here, Granma thinks. I am a person sized floral patterned lump stood over these red boots: somehow Little Grandson sees only floral bedding and has not registered the change in layout.
'Are you sure?' Grandad is in the room.
'Really sure?' That's the voice of Uncle Boy, a bit tired and gravelly after 11 miles of kayak with a sludgy partner.
'Yes,' the Grandson says, no trace of doubt. Even though the duvet is stuttering suppressed laughter.

Granma, Little Grandson and Uncle Boy sit to a table laden; several cheeses, meats, a pâté, two relishes, a chutney, a basket of breads, a bowl of frilly rocket leaf, a block piece of butter.
New Baby Boy sleeps and makes gentle wind on his mother's knee.
Baby Girl babbles from her Nanny's lap, and sometimes grumbles, and falls fast to sleep just as her bottle is ready.
Grandad drifts between, refills his plate; he loves the carrot relish in particular: not more than the children of course; and all the talk is food and children; Little Grandson eats mostly ham with butter. 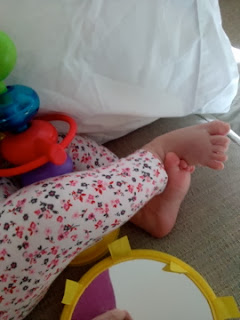