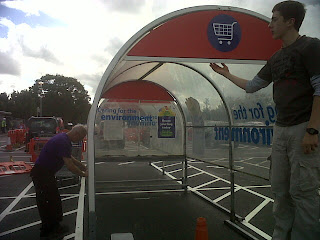 This morning, three stems of fluffed blonde pampas grass were flicked over the car roof. A car looks preposterous with a wig. Mr collects some extra eyebrows on the lane walk, in threads of spider silk.
‘Is it fake hair day?’ I ask but he only laughs.
We have four wild strawberries each and clear sight of the river mist.
This is the prequel, but not to fake hair day. It’s trolley bay day.
Mr has been clever, asking the supermarket refit manager what will happen to the old trolley bays. We are allocated two. He has put his budget greenhouse plan into action by hiring a van, and then we have panicked. We love the plan, a sublime blend of sensible, imaginative and ratchet spanners, and then there’s that dredging background static, the wearisome fear, the miserable part of a low end income: we can’t afford it, we will be caught too short, in desperation, sink in debt.
We’ve done it, though, we’ve hired the van, we’re in the car park, wrestling nuts and bolts and several metres of Perspex. A few scrapes and bruises, a lot of hours later, we seem to have won. Boy comes to help, on his way home, steps under the penultimate Perspex sheet in time for the best drama, as a steel arch appears to fall on our heads. It frightens the onlookers, and we are shaken up, even as we are laughing. This fear is exhilarating, liberating. After, ‘oh, it missed,’ there is only one thought in my head: ‘I’m not afraid to fail.’ 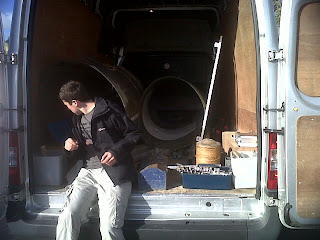