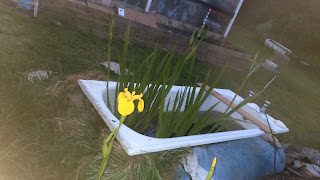 Houseguest Ben arrives at the door of the polytunnel.
‘There’s a bird in the bathroom,’ he reports.
‘One you know?’ I ask. (This is not a play on slang terminology for female persons.)
‘It’s not the chaffinch.’ He laughs, glances at the hedge. (Ben was stalked by a chaffinch one memorable afternoon. It is this bird to which I refer.)

This unknown avian visitor is a summer bird, too quick for him to catch: I come down to see if I will have more luck.
‘You’re beautiful,’ I say.
Dark glossy plumage with a red throat, sleek split tail, pointed wings; sat on the shower rail, head at a listening tilt. A compliment is what it has been waiting for, for as the words are uttered it flies out of the window, leaving a tidy curl of dropping on the bath lip.

Next door’s garden hosts a teddy bear’s picnic party. A swallow has nipped in to use our bathroom. What else might happen?

The new car is out there somewhere still: Southampton, the man on the phone had puzzled, our cars come from South Shields, not Southampton. Be another week.
But we don’t hand any money over till the machine is in possession, so it hardly seems to matter.
It is not the new car: although, yes it must be.
A new car: what did we do!
Something quite different: of course the new car is on our minds.

Feels like a ton of earth is potted on, or tipped into the newest raised bed. A layer of top soil and cardboard alleviates silage stink. Strawberries are ripening. Nearly time to net the currants. Clouds gather and shift. The air gets damp. In comes the washing, just in case. Mr paints frames for the melon patch in his almost tidy shed. Rain is coming. A storm wind on the horizon. A gravy pot on the hob. Still, something else, this sense of something else…

Tickets. Tickets for a long journey.
I can do this.
Press some buttons and then: Christmas in Taiwan, booked.
Drive to the airport in a new car, fly to Taipei. My brother and his wife will be there: holding a baby.
Our first meet with that new life!
Our suitcases, full of tinsel, dropped: there will be hugging.

A list of other things to do: kennels for Dog? Airport parking vs get a train. How to get to the train station? What shirts to pack. Do we have shirts?

Should we have done this: I don’t know: not regret, this is not regret I struggle with; it is the old fear of poverty, of everything being scuppered, or of myself, a turncoat, becoming pampered and apathetic.
And if we hadn’t done it? If we had made no gesture of faith in a new phase? Then regret would have lingered.

What else, I ask, sat by the window where the rain slides glassy drops; it’s dark out there.
I am tired.
The night whispers, I like to hear its voice.

I’m so tired I could drop into the hollows of my own eye sockets and wander as a ghost. 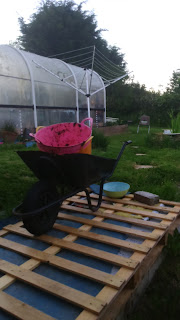