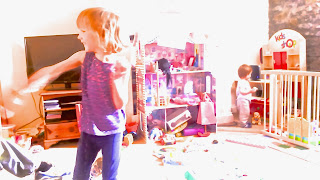 Saturday: Garden: wheeled up topsoil from the heap in the horse field with a borrowed barrow, ours needed a new tyre.
Mr went to buy a new one, twice: first the wrong size then the right, then the pump broke.
We have a new flat tyre. It’s closer to perfection than it was.

Saturday evening: drove over the Severn Bridge, squinted at sun-bloom on the wide river, admired the geometry of cables, the bold shadows. Arrived in time to watch theatrical acts compete on various televisual shows. Eager and numerous as the flies on our rotted grass: this is what it is to be an artist my dears.

Just be the fly you want to be.

The six year old who was staying up late decided she would rather be a dog. She would go to bed, but she would be practicing her bark, quietly; but her brother had already woken from his own coughing.
Everyone went to bed later than intended.

Sunday: morning brought rain. While the earth drank it up we stayed under cover; conveniently, this day hosted the 2015 Welsh Championships. I had my Welfare Officer shirt on, assigned to Ring 15, where the polite sparring of green belt ladies was followed by bouncy black belt boy cadets.
Only one injury stopped play: a kick blocked awkwardly by a regretful shoulder. The lad with the broken toe finished his fight.
All of the unfortunates who caught low kicks had a bit of time to deep breathe, they all got back up. The importance of keeping a guarded stance is easy to forget in the heat of wanting to win. But if it should happen to you: kneel down, breathe slowly and deeply, the pain fades. You can carry on. Later you will tell the story and feel better.
Later we went back to our friends in Taff’s Well, told them the stories.
Wine was opened.

Monday, freed from work, we went to a park, took the two children: dusted them in sand and soil, dipped their faces in ice-cream. A picnic basket was opened. After lunch the basket was carried back to the car.

‘We are literally unhampered,’ I said.

After archery, around the teepees we ran, and through the fairy woods, back past pygmy goats, Mr swinging on his crutches. In the car we asked each other questions like:
‘Why did the chicken cross the road?’

A cup of tea and time to go: one little boy was fast asleep in his cot, one small girl kicked out a sand pile in the hallway, abandoned socks and boots to come and wave to us: we would build a pirate raft, we planned, when the visit was returned, when they came to view our famous garden.

Summer is so close!

Tuesday: I would get up early to go for a run, I had said that. Wide awake at 5am I was not expecting. So widely open to wakefulness that sleep would not return. At 5:40am this was acknowledged.

Dog didn’t mind; she inhaled deeply in the wet air, followed the night’s stories along the hedge, while I was lost in birdsong and mist, in the breakfast squabbles of crows, in the bright banded shells of their snail feast. Flowers were opening. Wild strawberries profuse with green fruits.
At the steep hill I checked my legs, they were still moving. This was amusing: all conscious attention adrift in a landscape obscured with mist…

It didn’t seem to matter. The sky would clear to bright day.
For breakfast there would be eggs and strong coffee. 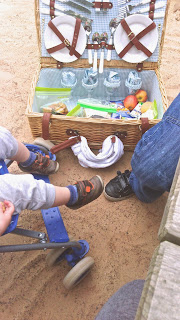 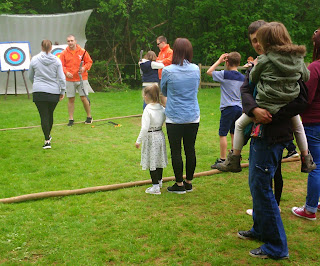 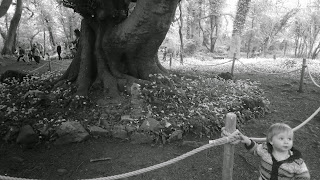