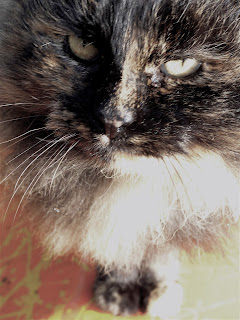 Skulking around the rabbit hutch, we saw her first, a small framed fluffy cat. I chased her off. She skulked the old sheds instead, then, wary of contact. Until: it was somewhere around 2am at the party we hosted for Girl’s nineteenth birthday, when thronged drunks were outdoors attempting disorderly and giving up, on account of being too drunk. We had dragged out garden benches and sat laughing, and into the middle of the scrum-cackle this cat appeared, and friended us, and walked into the open house and lived there. We called the vets, the next day, holding gingerly our coffee mugs, but none of her description were on the missing cat list.
We still aren’t sure why we let her stay.
It was the right kind of house for her, perhaps; certainly she proved a tyrant to the cheeky mice. Sometimes in the mornings she would have slime trails on her, a sign of a deep hedge sleeper. Her fur dreaded up. She didn’t much care for grooming. We named her Shambles and never knew how old she was.
All summer, this year, an unsteady decline has been in place.
One minute we would be sure of her demise, for she seemed to do nothing but sleep under the washing line, and the next we would find her eating a whole pigeon, circled by feathers, a grotesquerie of decadence. And she never dropped the habit of drinking from objects precarious (see below).
Last night she sat on the sofa, indoors, almost on my lap. The weather blew wild. We made her a bed on the shoe shelves for the night: left in the front room she would necessitate a carpet clean.
This morning she had been sick on the bathroom rug, not uncommon. But, less usual, then she lay on the kitchen floor, as though too tired to go further- not unlike our partygoers of 2008.
Lifted, she made three mews: little cries for sanctuary, helpless, kittenish, slumped in the crook of my arm.
She was on the sofa, warm and quiet, until her body cooled.
We will bury her, when the storm drops, out by the washing line, where she has loved to sleep so much. 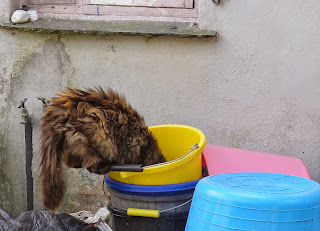