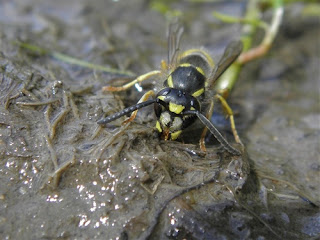 Two moments from the Kids' Camp weekend, interspersed with a memory: I often wonder what odd things will stick in these children's minds. One can hope it's a tradition of magnificent story telling and wise counsel, one can hope it's the excited discovery of achievements: the first time they step out on the zip wire, the first stay away from home… but it might be a dead or deadly insect.
***
I was sorry that we drowned the wasp. There were plenty that didn't slip into the simple trap. It helped to keep a sense of calm, I suppose, to know there was a way to halt their stinging sprees. Some of the children were allergic. The drowned wasp did not scare them. They could observe the shape, the infamous stripes, the articulated legs, those mournful eyes, the tiny slack mandibles.


Boy shrugs. He has tried the old trick of luring them off with a picnic lunch of their own: an apple split and left open in the hedge-line. Evident from the creature that lands on his own sandwich that an apple was not enough. The bread chomping is so hearty I can imagine that it burps. Vespula Vulgaris, the common wasp: well named.
Eleanor squints at the body in the drinks bottle. She wants to know what to do with it.
'Put it in the hedge, so it can go back into the earth.'
A simple insect funeral is performed.

It's odd, the things that stick in a mind. I remember a beer garden lunch; long ago when chicken-in-a-basket was a novelty dish; there being a pint glass on the table squirming with these black and yellow monsters. At the tabled area the air was laced with grease, beery sweat, perfume, cigarette smoke. The metal cutlery too hot to touch. Away from here was short grass, cool under foot, and flowers colours still bright in shade. Ladybirds were considered friendly, but close up, no less alien than wasps.

Later, after we have all been into the woods to locate a variety of tree species, a girl leans over a leaf we are identifying. She thinks she sees a ladybird.


'It's a Harlequin,' her team leader says. 'They actually eat our native ladybirds. You should squish it, really.'
She looks closely at the orange invader, uncertain, lets it disappear under a leaf.