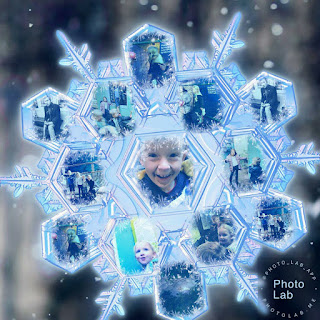 A peek back at the void between Christmas and New Year.
We filled it with grandchildren (and work, which is sort of cheating).
Managed to corral four of the little Gs for Granma’s instantly regretted plan.

‘Let’s go ice skating,’ she says, ‘at the Eden Project!’
It’s sparkly magic there and that has made Granma overlook her mortal fear of ice.
(Once there was an accident: head… crunch… she still hears the echo.)
But sparkly magic is strong, she tells herself.
Grandad rubs his knees to comfort them.
Oh, but look at those four sparkly magic faces!
Pretending altruism, Granma also pays for Uncle E to attend - Uncle E who can actually skate.
(He isn’t fooled. He is bribed.)

‘You don’t have to skate, if you don’t want to.’ Granma says 1000 times, to each little G, forgetting that a lack of pressure will compel.
So she has to queue for skates, give up the welly boots, mince onto the ice.
Grandchild 1 is eight years minus one week; skating and smirking, he’s off. He fears looking foolish: he’s a blend of brave and ego-tastic right now.
Grandchild 4 gets first whirl with Uncle E, eyes wonder-wide, like a life size puppet.
Grandchildren 2 and 3 edge the rink, holding the rail, finding and losing balance, bursting with giggle-shrieks.
Grandparents also edge, also giggle.
What on earth is happening?!
The music is fun, the lights do sparkle.

And look:
G1, sailing in bliss. Skill of a nearly eight year old. Nearly. Eight.
G2 stays close to the rail, trials moves. Earthy chuckle when she slips. Starts again, somewhere between experimental and methodical.
G3 is fourandahalf. She flings herself, being surprised each time by a gap between expectation and reality. It does not undermine her recklessness at all.
G4 is justfour. He has great determination to master a skill, interspersed with a great desire to be noticed, which he expresses through the medium of sudden dancing.
G3 and G4 account for most of Grandad’s shin bruises. And the delayed onset muscle soreness awaiting Uncle E. And Granma’s sore ribs from laughing.
‘Were you scared, Granma?’ Mocks Uncle.
And she laughs again, because she had forgotten about the fear.
Magic Ice!

The little Gs are cold though, queuing in their wet socks to regain boots.
So - everyone runs to the top of the rain forest (biome) (looking out for dinosaurs) until they are too hot.
So - everyone runs to the ice cream kiosk - and outside to watch the laser show - bearded with melty chocolate, until they are too cold again, and tired, and being mean to each other and making up.

It’s past midnight before they are all asleep.

Grandad pours two brandies.
Granma says she might have ice with hers.
But only if it’s sparkly. 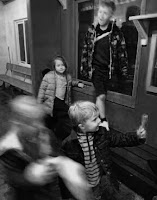 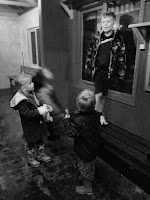 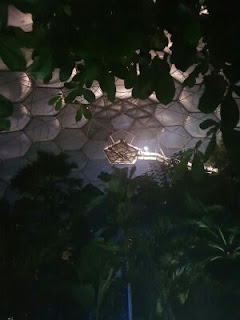 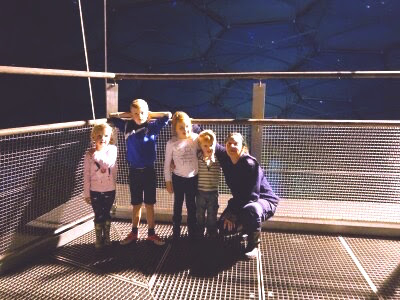 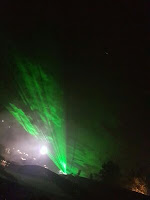