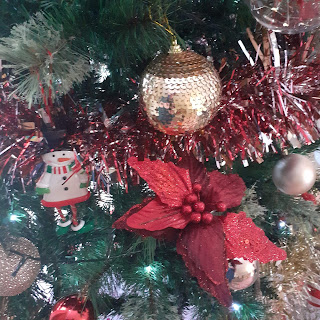 For this year’s Yule Tale, being short on time due to obsessive novel writing and that lifestuff, I decided to grab outside inspiration from the www.plot-generator.org.uk website. What I got was delightful nonsense, most of which I have kept, with a tweak here and there which was a bit like when children decorate a xmas tree and their parents maybe move a bauble or two after they have gone to bed because aesthetically it is the right thing to do.
Presenting Yule Tale 2019:
Two Surly Uncles Laughing To The Beat

Sparkle looked at the shiny cup in her hands. It was full, which felt like mockery.
She walked to the window to reflect on her surroundings. She had always loved Yuletown’s bleak wintry fir trees; they encouraged her to indulge in feeling mournful.
Pines, pining - there was surely a connection.

Her eyes narrowed, seeing something move in the distance. Someone? That would be a rare occurrence in this unpopulated zone!  As she peered and the figure drew nearer she recognised that this was a someone, and someone known to her: it was Twinkle, a funny sidekick with tiny hair and petite elbows.
Sparkle was a fluffy, kind, eggnog drinker with frail hair and dainty elbows.
She did not know what Twinkle liked to drink. If Twinkle called in, what should she offer? What else might a guest be in need of? A comb? Some elbow cream?

Sparkle, attempting calm, ran through a list of things she knew about herself.
Her friends saw her as an annoying abundant angel.
Once she had saved a snow leopard cub from a drain.
She loved eggnog, though many didn’t.
She would like to feel better about her inner emptiness and maybe she had come here to this stark scenery to face her truth.

To her relief, a sudden snowstorm teased like skipping penguins. She could see nothing but this whirl and surely it would discourage a person from visiting?
It was hard to think of penguins without thinking of their cheery ice-antics.
Twinkle knocked on the door.
Sparkle could not ignore this. She opened it. Cold air slapped at her.
Twinkle of the tiny hair and petite elbows said in hushed tones: ‘I want to be accepted. Do you think I can be accepted?’
Sparkle of the frail hair and dainty elbows looked back, fingers gripped around the shiny cup. She had not expected this encounter or question, nor was she aware that she had the answer, though she did, and it presented itself with confidence.
‘You are good enough,’ she said, bursting into tears that began to freeze, ‘that’s all anything or anyone needs to be!’

They looked at each other with big hurt feelings like two discombobulated donkeys recovering on a sweet holiday which had piano music playing in the background and two surly Uncles laughing to the beat, while somewhere a bad bauble bobbed in a breeze.

Then Twinkle came in for a nice swig of eggnog, and, as one, they watched the sun set, spilling its fire-colours over snowy trees.