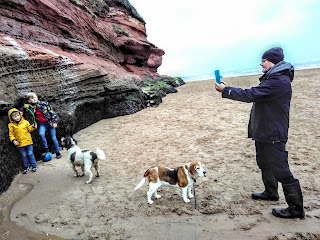 On Monday the first thing I take note of is a waning gibbous moon. A blue-silver bloom floating in pale morning sky. Two cloud tufts make eyes, the moon makes a button nose, a face more awake than mine. Cold takes hold of my fingertips, brings attention to frosted car windows. A visible sigh in the beautiful air. It’s Monday and I need to drive. Blow a kiss to the mouthless moonface, grab the ice scraper. (Call yourself petal out loud, no else is awake to know about it. List the things to be done: do this, do the next thing. Get it done, petal.)
Yesterday we trailed to Exmouth, piled the little car high with boys and dogs, took them to the beach. Grandchild 1, Grandchild 4. Two of our counted blessings. One football, a few squabbles: the usual brother-banter. A slimmed down Fat Beagle, a springy Dog who would ache later. A dog’s ball for throw and fetch. (For spaniel Dog, for this is her vital work. Beagle is more about the scents and the schmooze.)
No sooner do we tread the sands than the miracles begin. Penguins, Grandchild 4 shows us (they look much like crows) PENGUINS THAT FLY!! But they are birds, he further reasons, so of course birds will fly. On no account are they not penguins. Grandchild 1 chuckles. Agrees. Joins our conspiracy of cuteness. Penguins!
We go in search of caves but the tide is closing and the sky drops its colour and the little one tells us that the the sunrise is going down. Yes, we say, how lucky we are to see this. A sunrise that goes down! Look - more penguins!
They both get wet feet. They share throwing the ball for Dog. Five goes each: a challenge to get the ball to the sea before Dog grabs it. Fat Beagle grunts at smells. A girl asks to pet him; he has such soft ears. Return the boys to warm up, eat home-cooked food, lie on sofas, lamp-lit and overtired and watching Christmas films - because this year more than ever we’re all in it for the feels, not the stuff. (Though we bought birthday presents for Grandchild 4: he wanted glue for making things and seeds to grow. They’ll be peas and broad beans and purple carrots and, if tended right, the world’s biggest pumpkin grown by a five year old.) And here I am on a Monday, under the nose of the moon- and look, a penguin! 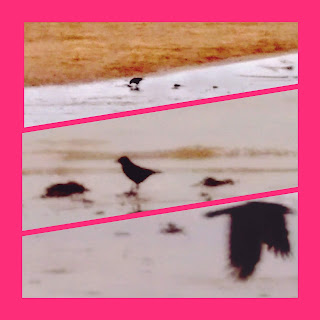