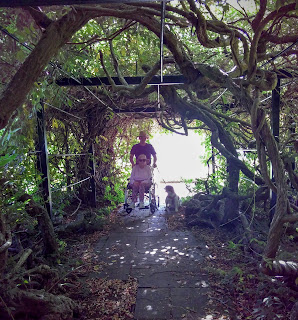 We took Granma Grace for a garrulous walk around Pince’s Gardens. To get there we went over the river on the busy bridge, under the road through chirpy subway graffiti, along dusty Alphington (which Dog did not like) under a railway bridge of rough red stone, through quieter streets which once was all grand houses and some survived the bombs of the Second World War, and in the gaps modern boxes were built, and pretty trees grow, and hydrangeas and fuschias make appealing hedges. There was a boy lived this way once, his name was Gordan, his house was called Kingsley, number 38, it backed to the allotments where his father grew vegetables of many kinds. Grace smiles. This is where Grandad Gordan lived when they first met. They would walk around Pince’s Park (which was built in 1912 and also survived bombs) and that was, she thinks, 70 years ago, at least. We are, at this point in her tale, in the Gardens, coming out from under a magnolia tree, about to step under the wisteria arch. I love the wooded stems-become-trunks, the tubular turns, how each twist has an air of randomness and purpose, an air of things we almost understand (the forces of nature, growth, determination) how the foliage pours out, and the flowers lift to the light. Seventy years ago, Mr says, gesturing at the supporting frame, this steel would have have been wrought iron then?Yes, says Grace.And the wisteria only 40 years old.Yes, says Grace.The stems would all have been greener then.Yes, says Grace, we would have been.She misses him everyday, but it is fine to be walking with your son and his wife, and happy Dog, and have stories, and new shoots winding fresh: years go by and need not be lost. 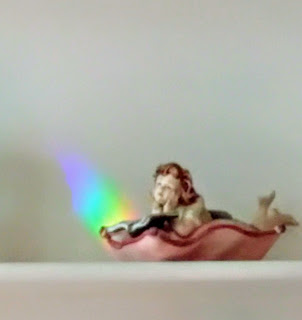