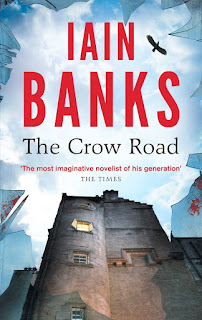 Mostly I'm behind the times on reading, because my books are most often purchased via the 50 pence box of our local secondhand bookstore. This one was loaned to me though. The nice thing about reading old books is if there was a fuss about it at the time, I will have forgotten, and read open minded. I had no idea this was any kind of detective novel when I began, it only occurred to me afterwards that there was a mystery to solve. I was caught up in the main character, and the fun of it. It is peppered with death, but warm hearted, and I loved the landscapes. The change in narrator from Prentice to his father, the moving time line, these made the reading a little fragmented but never disagreeable.
'It was the day my Grandmother exploded' is an engaging first sentence, and it held my attention throughout. I'm terrible at summing up plots so I stole the following from Wikipedia, for those who might need more info:


'Prentice's uncle Rory has disappeared eight years previously while writing a book called The Crow Road. Prentice becomes obsessed with papers his uncle left behind and sets out to solve the mystery. Along the way he must cope with estrangement from his father, unrequited love, sibling rivalry, and failure at his studies.
The estrangement from his father concerns belief in God or an afterlife. Prentice cannot accept a universe without some higher power, some purpose; he can't believe that people can just cease to exist when they die. His father dogmatically denies the existence of God, universal purpose, and the afterlife.
A parallel plot is Prentice's gradual transition from an adolescent fixation on one young woman to a more mature love for another.
Prentice's efforts to piece together Uncle Rory's fragmentary notes and the minimal clues surrounding his disappearance mirror his efforts to make sense of the world, love, and life in general. The narrative is also fragmentary, leaping days, months, years, or decades back and forth with little or no warning, so the reader must also piece things together.'