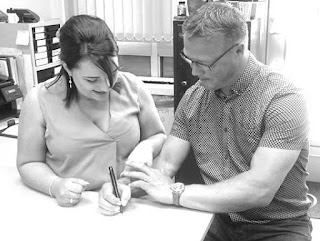 All the legal requirements were signed off in a minimal office.
A stationery cupboard, Daughter 2 reported, laughing.
Next order of business was a wedding breakfast: except for the groom, he had to fit a medical into his day (work related, not for marital purposes, in spite of our teasing).
People who asked what the plan was were given times and places - more guideline than fact, and even the invites had a wrong postcode but only a few guests were lost. Eventually most of us were there, contented and emotional in the field by the pub, with a wedding arch and an aisle of tin-potted flowers.
With a traditionally nervous groom (who is all ready just married to the bride, this is How Much Will I Cry nervi-ness).
(Passed the medical too, in case you were worried.)
With a traditionally blooming bride (rocking the satin, sweetie) a proud father, a cornflower bouquet, a gaggle of girls dropping petals.
And no one to officiate.
Which was part of the plan (fans of Friends might remember - The One Where Joey Marries Chandler - other guests surmised surrealist theatre, perhaps).
In ran the Landlord, and, by the powers invested in him by the Duchy of Cornwall and those internet guys, Man and Wife were declared.
The children, of course, disapproved of the kissing.
But it did mean now they were loosed to play (photographic duties aside) - on both bouncy castles (one a slide, one a tug-o-war) and in the dressing up box and pulling hay bales to bits and finger painting. They decorated buns and we piled them up and called it a wedding cake, and then they devoured them all like terrifying ants.
Star moment for Grandchild 5, who took her first steps!
Star moment for Grandchild 4, making a nest in the hay pile. He is so cute, his Auntie takes a picture. ‘Flap your wings,’ says Granma: gets the reply: ‘I can’t Granma, I’m hatching!’
Grandchildren 1, 2 and 3 are blurs - smiling, swooping - quick drink, slap of sun lotion - gone!
Clouds hover but the sugar-feral tinies most likely scared them off.
So we were left in the sun to drink and dance and bounce until even the children were tired and crawled into tents. So the grown ups, who should have known better, got the brandy out, even stole a bottle of rum, and lost bits of skin being bombastic idiots on the bouncy slide.
So, the next day I am lying in my hammock, no other jobs will get done.
I hear hedge birds sneak into the polytunnel to eat ants and remember that birds can get drunk on too many ants. They might be the lazy ones tomorrow.
I am missing skin from a piece of knee.
Daughters 1, 3, then 2, all married now.
(Only Son 2 is unhitched, ohmygosh.)
The family grows and grows, and I have decided to number our children as I do with the grandchildren, partly because it is tidy but most of all to be literally always counting our blessings. 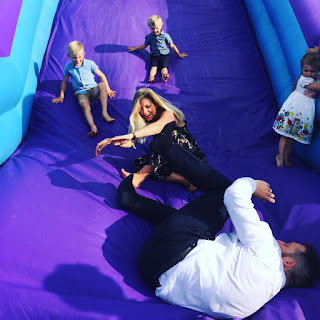 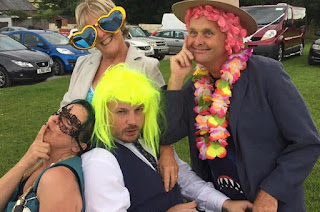