In The Middle Of The Winter Feast 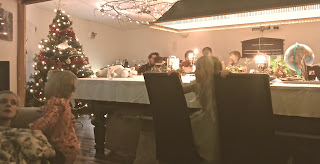 On the fourth day of Christmas her true love gives to her:

But to the dearth of our amusement Grandchild 2 finds a book detailing the traditional 12 gifts and begins to teach herself the proper form. Not so proper she can’t slink off with all the cherry tomatoes. If questioned, we know it was not Grandad. She says it anyway, laughing.

Grandchild 5 can follow the others with her eyes, she wants to be up to mischief like the others say they are not.
Grandchild 1 kicks a football onto the grass he is not supposed to run on because… something about mud… if he asks Grandchild 3 to fetch for him he has contravened no carpet law!
It’s not his fault we were all listening.
And where’s Grandchild 4?
Not hitting anyone with a stick of course - that was Dog, he says.
It’s not his fault we were all watching.
Grandchild 3 casually drops a stick behind her back.
But we’re all laughing.

Frost fading fast, a bright sun. Cold meats on plates.
Standing quiet, in the middle of our winter feast.