Been etching at the novel today.
Protagonist Anya, throughout the book, tells her story mostly in retrospect but also in the present tense, because of how the past clings. She takes us to relive directly, using italics to denote her own direct thoughts, and indirectly by allowing a third party narrator. Today's big scene happens around 1973, although the events could have happened any other year. The next novel I might have a go at has more period detail. (I love how this makes it seem; that I just slap and dash my keyboard, throw a couple of hundred pages together.) This is what I edited and wrote and edited today, with the odd pause to discuss sheds and eat. 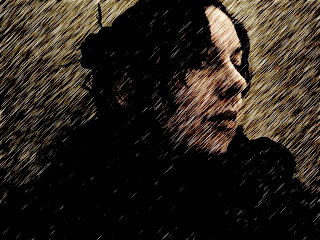 Anya stares harder at the horizon. In her chest, a cold heaviness presses, as though she is turning to stone, like one of the granite maidens in the old stories, cursed for dancing on the Sabbath, and the little flecks of silver mica will be her frozen tears.  Frank drives on. The road shrinks, twists, the sky darkens.  They turn off the road and onto the lane that leads to the cottage, the cottage with its curtains pulled firmly shut, lights shining within. As though it was still the night that she had run away from it, escaped out of the door with a cover story and a uselessly thin coat.
'I'm staying at Mary's house tonight.’
‘Have you done the coal?’
‘Yes, I’m all done.’

Well, I'm not sixteen anymore, she reminds herself, I’m Mrs Frank Bench; as the handbrake grates and the engine shudders to a halt.  Frank leaves her in the van while he knocks on the door. The door opens, light spills out; she can see the back of him, shaking hands, raising his hand in greeting. He turns and waves her in.  She picks Michael up from his carrycot, which is wedged in front of her seat, clutches his blanketed bundle in front of her, aware of trying to draw strength from the warmth of him.

'Well,' her mother says. ‘Here you are.’
‘Hello.’ Anya is shivering.
‘Come on in, all of you,’ Dad puts his hands on Mum’s shoulders, moves her gently aside. ‘Come on in and let’s get the kettle on, and have a look at this grandson, shall we?’
‘Thanks mate,’ Frank says, ‘I could murder a cuppa.’ He puts a foot over the threshold.
‘Boots!’ Mother points.
Anya gets a glimpse of Peter, leaning in from the living room. He catches her eye and disappears. Frank leans down to unlace his workboots.
‘Wasn’t thinking,’ he says, ‘Sorry about that.’
‘In you come love,’ Dad waves Anya in. Her shoes slip off. Dad squeezes Mum’s shoulders, then steps forward to fold Anya and her baby son in his arms. He’s so warm. Anya leans into him. He smells of coal smoke and sawdust. She doesn’t want to move.

'You can stay for two weeks,’ Mum blurts, ‘we have a lodger booked in, in a fortnight, and we just can’t cancel. It’s our living, you understand.'
‘It’s good of you to help out,’ Frank pats her on the arm; pulls his hand away and stands awkwardly in his socks.
‘Well.’
Anya can’t see her mother’s face. She doesn’t need to.
‘At least you’re married now.’
‘Come on through.’ Dad draws them to the living room, where a fire is chugging in a wood burner. ‘Like it? Cuts down on the soot dust. Burns just about anything, as long as you keep the flue in check.’
‘It’s good,’ Anya chews her lip, smiles at the boys who have grown taller and who are staring at her as though she's been resurrected.
‘More of an electric man myself,’ Frank admits. He sits on the sofa, holds his feet up to the heat of the flames.
Dad plucks Michael from her. 'Come and meet your nephew, then, uncles! He won't bite!'
Michael blinks at the new voices.  Peter and William edge closer. Peter has shadows on his chin, like he has started shaving. William’s hair has that darker line he always gets in winter, when the sun can’t lift hazel strands from the deep brown.
Peter looks at his nephew, looks at his sister. ‘Got your eyes,’ he says. He sounds like a man.
‘Can I hold him?’ William reaches out.
‘Yes,’ Anya nods.
‘You can sit down too, love,’ Dad says; ‘right, Will, that’s it, keep the little chap’s head up.’
William grins. Behind him, on the wall, Anya sees that her school photographs have been taken down.
I'm not going to cry, she promises herself.
Mum brings in a tray of tea, sends Peter for the biscuit tin.
William has seen her looking at the wall: with his back to Mum, he rolls his eyes at the pictures. Anya's smile flourishes. 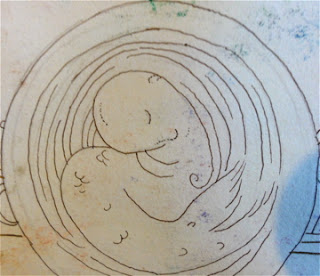