The Nights Draw In 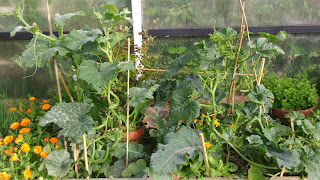 Some garden crops lie ready for reap. The rocket (arugula) though flowering still, is falling back. Seed pods turn to parchment, holding bumps of ink. Pumpkin leaves smother the beet, they over-reach - abundant bullies. Some of our tomatoes have been picnicked by mice. Seeds dropped hither and thither: they are not tidy, these mice.
Autumn starts with renewed purpose.
Fruition is the beginning not the end.
On goes the pan, to boil up jam, ketchups, chutney.

Some nights curl in, as a coverlet.
Not this night, this early September eve; this uncovers, supersedes.
We lose the illusory day and are left breathless.
Facing darkness we are reached by pins of starlight. Distance in galactic scales: still they reach us.
We are moth-like, small parcels of heart and instinct.
It is the winter’s cold strike that readies the seed.
The pull of the stars that wakes us. 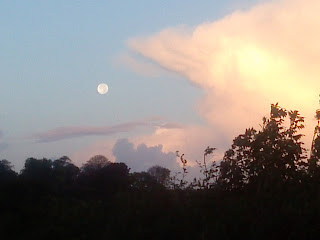