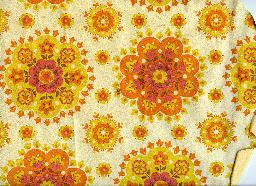 This may or may not be a false start; it might be the start of a second novel.. In a rush of a day, so slinging this up without thinking about it- will be round to visit fellow false starters sooner or possibly later this weekend. Or Monday. Busy weekend!

Charleigh, aged six, looks in the mirror; she's standing on the double bed in the room she shares with two of her sisters; and this is what she can see:-
The mirror; a circle of glass in a yellow plastic frame.
The wallpaper; a fat field of sunflowers growing in swirls of brown.
Herself; only just visible, hidden in between the representations of field and flower like a fledgling pushed out of the nest.

If she concentrates, she can just about trace her skinny framed outline trapped in the rows of yellow blob flowers, just about see, with her chinky blue eyes, that her straight, pale brown hair is still too thin to cover her sticky out ears.  Damn, she thinks (but dare not say aloud).  Her mother has been wilfully wrong.
'Mum,' after a day too many of teasing at school, Charleigh Dumbo Ears had cautiously approached her mother, 'can I have an operation so my ears won't stick out?'
'No, no, you're lovely as you are.  Anyway, you'll grow into them.  Stay still, you bloody animal!'
But this prediction wasn't coming true.  Her mother had not looked up from brushing the dog.  Including Roxy the Alsatian everything had to be correctly presented; fur groomed, collar polished; clothes and coats were kept immaculate (or there'd be trouble) but as long as the bodies in them were clean it didn't matter what they looked like.

You must be content with what God had seen fit to present you with.  Using the last bits and scraps of body parts left in the box was one of God's ways, one of His ways of stunting vanity.  Mother knew a lot about God for someone who never went to church.  What He thought about her panstick make-up, hair rollers, beaver skin coat or extravagances at the jewellery stall down the market, she never revealed.

Charleigh fluffs her hair with her fingers but her ears resolutely stick through.  She sticks out her tongue at the wimp in the mirror.  She is supposed to be getting the bath run, ready for the baby and her to be scrubbed.

Clothes, that was another thing.  Among many other things and she was into the swing of disgruntlement now.  She smooths down the unfriendly nylon print of a dress, wishing she could rub off the orange and brown flowers.  The whole house is brown, orange, yellow, swirls and flowers.  It doesn't smell of flowers.  Downstairs was scented by the steam and grease of cooking, and the daily polish of the darkly varnished furniture; upstairs by the regular use of perfume, hairspray and toilet bleach.  Charleigh envied from a distance the nicer clothes, homes and families of her school friends.  At least she had some friends at school, some that didn't call her names or push her over in the corridors.  And she had one dress, one dress that she loved to wear.  It even had its own name: The Strawberry Dress.  Grey cotton with an embroidered border of bright red strawberries, the Strawberry Dress had once belonged to her friend Cathryn-Jayne Fitzmichael.  Charleigh had longed for a dress the same, dreamt about it, prayed for it, lost her appetite over it.  The day her friend had grown a little too wide and tall and unexpectedly handed the precious item down to her was the day she treasured most out of her whole life so far.  She didn't expect to have another day as good as that.  A day like that you stored safely in your memory and kept forever.  She gets off the bed, straightens the slight dent in the orange nylon cover.  She is supposed to be getting the bath ready for the baby and her.

Baby was Mum's last.  The eldest three girls; Vivianne, Robynne, Lyndseigh; had married and left.  Tonie and Jacquie were usually out, Charleigh and the baby, Peta, were usually home.  That was the order of things, like a production line; leave school to get a job, leave work to get a husband so you could finally leave home.
'That's another wage packet I've lost,' Mother would comment prior to each blessed union.  Maybe that's why she had three jobs; one for each lost wage; cleaner, barmaid, pub singer. 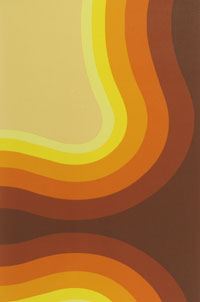